It’s been a while since I’ve actually picked up a book and read it. While on Winter Break, I brought A Tree Grows in Brooklyn with me on vacation, the only book I’ll read during the school year.

This week, however, my schoolwork was overwhelming me and I missed reading for fun so badly that I decided to stop by the library. In the midst of all of this college stuff, I pushed reading off to the side, which is just a real shame, because it has major therapeutic value for me.

The librarian there, my homeroom teacher from last year, recommended four books to me; I told her that I was in the mood for girly novels, and she did not disappoint.

The first book that I picked up was Why We Broke Up, by Daniel Handler.

Eventually, however, I slowed down and read it to myself in my head, what seems like a 350-page monologue from an angsty teenage girl – and I loved it.

The main character, Min (short for Minerva) starts to date the co-captain of the school’s basketball team, Ed. What you’d expect to be your typical unbalanced-high-school-relationship is really much more complicated and nuanced than that, as Handler uses the layout of the novel to map out a very intricate story.

From the title you can infer that Min and Ed obviously break up in the end, but you don’t know why, how or when. You’re left wondering with every page turn and that expectation changes the way that you evaluate the book. Eventually you start making hypotheses, and our minds interpret this story, applying it to our own love life.

Min tells this story to us as she drives to Ed’s house to drop off a box full of random items that she collected during their time together.

These objects. They tell a story, but not the typical story you’d expect. When I say rose petals, what do you think? Romance and lust? Not the case with this book. These are very random objects whose backstories deepen the context and complicate the personalities of Ed and Min; a toy car, a torn school poster, a spiky tree burr. 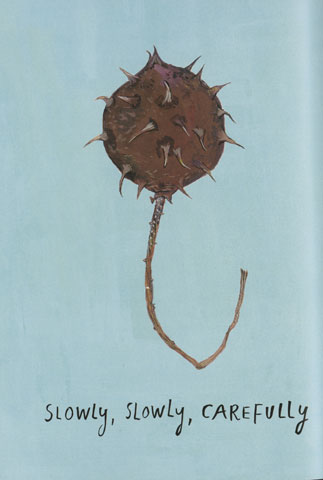 Her language is full of spite, and is a monologue speaking directly to Ed that frequently tangents off into long, uninterrupted lists. But isn’t that what your mind sounds like inside your head? This book reveals the indecisiveness that we all have in common.

Many of the chapters allude to the title, attempting to explain why every step of the dating process revealed a flaw in the relationship, ideas that Min realized only after her and Ed break up.

The beauty of Handler’s writing is that he omits unnecessary details. By the end of the novel, we know very little about Min’s outward appearance. But our inability to envision a Minerva inside our head makes the story all the more relatable; the author sends to us a universal message that rings loud and clear no matter who we are.

Handler also knows when to write out lengthy conclusions for us and when to let actions speak for themselves. Ed’s actions frequently don’t need further explanation; they make me question his integrity and whether or not him and Min are indeed a good fit as she so thought at the time.

In the end, it seems like Ed and Min were only together for a few months. Every relationship doesn’t have to be very long-term for it to have an emotional impact on those involved; many might accuse you of exaggeration, but the intensity is real. This book shows those who understand this that they are not alone.

This story isn’t guarded; it has certain controversial elements to it. It addresses real societal problems in high school, such as the use of offensive words like gay and fag to intimidate others about their sexuality, most notably Min’s best friend Al.

Another strong component to the story focuses on the tendency for girls to feel pressured to overwhelmingly sexualize themselves, an influence present mainly in Min herself but definitely in other female characters such as Annette and Jillian.

In the end, the reader will realize that everything gets tied together; the symbolism that I can tolerate outside of English class is worth noting because I noticed it without trying very hard. Ed and Min’s first date? Watching Greta in the Wild? And what happens to Greta in the end?

(SPOILER ALERT: The actress turns out to have already died although Min may have believed otherwise, which is indicative of how Min and Ed’s relationship has been supported by some false expectation, some false hope that just deflates suddenly at the end.)

Why We Broke Up hooked me well. I finished it in one afternoon, mainly because I was lured in and led to believe that the story would end a certain way, but Handler quickly yanked me around in a 360 towards the other direction. Plot twist!

*EDIT: One thing I found out over the weekend is that Daniel Handler is ACTUALLY Lemony Snicket. THE LEMONY SNICKET, the one who wrote A Series of Unfortunate Events. I know, the writing styles are completely dissimilar.