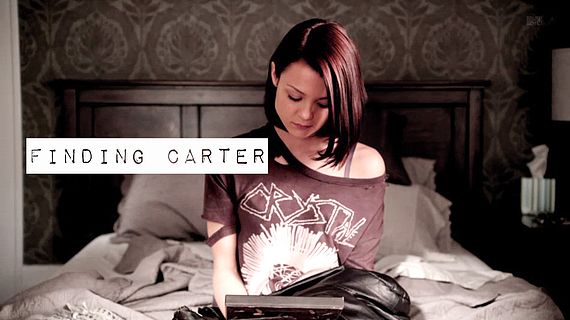 You remember Emily Fitch, right? Kathryn Prescott played the shy, lesbian twin sister on the popular UK TV series Skins, and now, seeing her face in a new setting without a British accent is downright bizarre.

Prescott is now a rebellious 16-year-old who was abducted at 3 years old, struggling to adjust to her new life back at home, after living a big, fat lie. Oh, but don’t worry, she has a twin in this TV show too.

While I was originally skeptical since it was an MTV series, there are many redeeming qualities of the show that I enjoy.

1) The relationship between Lori and Carter – as Carter transitions back to life at “home,” she seems to be in frequent denial about the nature of the crime her “mom” has committed.

There’s obviously some secret yet to be revealed to the audience about Lori, about why she kidnapped Carter in the first place. Despite being a model mom to her, Lori’s act, 13 years in the making, is tainted with the mystery and wrongs of her initial abduction.

Carter refuses to believe that her mom has done anything wrong, comparing her upbringing to the treatment she receives in her original household. However, as the days pass, Carter starts to feel accustomed, even forgetting who ‘Lori’ is at one point.

When Max reveals to her that her mom intends to bring her back, there’s a look of hesitation on her face as she ponders if she wants to go back to living that lie.

Lori, on the other hand, turns from mega-loving mother to obsessed creeper as she’s forced to live in disguise, staying close to Carter and even daring to hover outside of her house. Convinced that Carter wants to return to her, she compulsively watches from nearby to observe how her baby is doing.

2) Her name – Carter’s real name is actually Lyndon, and when she is first approached cautiously by her family, she is called “Lyndon,” a title completely alien to her.

Despite everything in her life that turns out to be a lie, she refuses to be called anything but Carter, because it’s one of the only parts of her previous life that she can bring into her new one.

She is Carter because of Lori’s parenting, and she doesn’t regret who she is. It’s symbolic because it’s an indicator of identity, and she’s currently suffering an identity crisis.

3) Her parents’ relationship – I am eager to see where this goes, especially the role of the father, who wrote a best-selling book about Lyndon’s abduction. What Carter doesn’t know (at this point) is that her father, under pressure to make money, is planning to write another book about her return, against her wishes.

So, MTV has established the father as a stay-at-home dad who sits on his computer all day. What of the mom? Well, she’s a kick-ass hardcore detective who radiates stress and militant control, that’s who she is.

The relationship between Elizabeth and David is a nice contrast to conventional American TV shows, where the mom stays at home with the kids and the dad goes out to work at a “real job.” But this contrast creates tension between the couple, pushing Elizabeth to cheat on him with a fellow police officer, who just happens to be the father of one of Carter’s new friends.

However, there are lots of faults and unrealistic aspects of the plot line that make parts of the story rather predictable.

1) Take, for example, Grant. Who, you ask? The forgotten third child of the Wilson family, who feels like he’s never received adequate attention, regardless of whether or not Carter/Lyndon was at home, safe and sound. I suspect that he will, in some episode, act out or put himself in danger in a cry for attention.

2) Also, what the hell did they do with Taylor and Max? The goody-goody twin sister who, when we first meet her, hasn’t done drugs or drank or even gotten her first kiss, suddenly does all three by the third episode and gets together with Carter’s ex-boyfriend-turned-best-friend. It’s like MTV was going through a checklist of plot-twists and cramming them all into as compact of a space as possible. I suspect a love triangle somewhere in the near future.

3) How does Carter already have more than one love interest? How does she, before the sixth episode, have three?

And wow, the contrast here:

a) Max, her boyfriend with whom she promptly ended it right before her life turned upside down. This boy is continually loopy but inside, a really good person. He’s like the voice of reason in a most unconventional form; something makes me feel like in the end, Max and Carter will get back together.

b) Gabe, the preppy white boy who follows Carter around like a puppy and always tries to make her happy, ready to wait a lifetime for her to finish fooling around with….

c) Crash, a convicted felon who makes Carter’s heart beat fast, a drug dealer, the bad boy who is up to no good, who will probably ruin her life, who just needs to get the hell out of this TV series.

Finding Carter is an MTV series that premiered in July 2014. It’s currently in its first season.