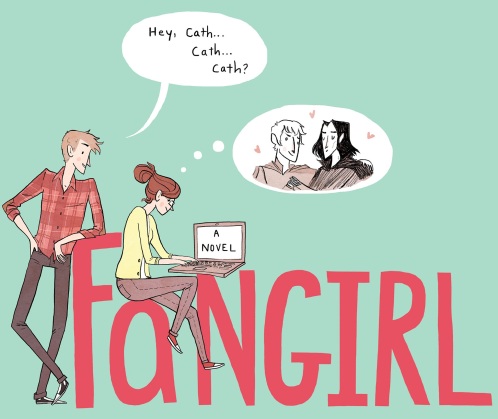 When I rediscovered my love for fiction, the second book that I picked up, after Why We Broke Up, was Fangirl, by Rainbow Rowell.

My first impression of it was that OMG! Her name’s Cath! I can connect with her somehow, until towards the middle of the book it’s revealed that there’s a much deeper underlying meaning behind her name being Cath, as opposed to Catherine.

As I read, I was sucked in immediately. This story recounts the first year of Cath, a freshman in college. Her twin sister, Wren, is starting to grow apart, moving on from their favorite pasttime, writing fan-fiction for Simon Snow novels (basically a play on Harry Potter).

Wow, Rowell’s delicacy in details reveals the effort that she put into creating just the Simon Snow storyline, as each chapter includes either a portion of a Simon Snow novel or a tidbit of fan-fic.

The series of events that takes place in this novel demonstrated immediately to me the imperfection of Cath’s life.

It’s creepy how strongly I can relate to this Cath chick. First, the namesake, and second, she writes online for people that she doesn’t know on a daily basis and often gets sucked into it.

She, like myself, sometimes feels an obligation to post something but battles with this impulse by posting when she can, but not sacrificing the quality and integrity of her writing.

Having the tendency to become disillusioned from real life, her obsession with Simon Snow fan-fic makes social interactions all the harder, as Cath seems to only stay in her room and write all day, while everyone else goes to parties and makes a great effort to form new friendships.

Finally, she’s a freshman in college. Rowell includes every relevant detail, like being away from home and getting to know a campus, elements that should not be skipped over. I’m going to be a freshman next semester! How this book makes me simultaneously enthusiastic and anxious for college.

But the differences seem to taper out there, as under her twin sister, she feels like the shadow, the after-thought. Rowell’s depiction of the two creates a direct foil, a very distinct comparison of personalities.

Unlike the last book that I just reviewed, the focus on the main character spans many details that create an overall comprehensive story, leading to its more realistic quality. As relevant as young love may be, Rowell doesn’t fall for the trap of skipping over messy family issues, and the real-world problem of teachers not living up to their standards.

One genius detail that compelled me: Cath prefers to go by her nickname Cath, as opposed to her real name, Cather. Her sister’s name is Wren.

By insisting that everyone call her Cath, the main character is implicitly taking a step towards adopting a new individual identity for herself, even if she can’t be as explicit with her other actions.

Their mom didn’t want to come up with another name when she found out that she was having twins instead of just one baby, so she split one person into too; Cath’s always felt tied to her sister, and the intrinsic concept of twins means that they are always associated with one another.

Wren has an easier time pulling apart, and this novel partially recount’s Cath’s struggle of growing in a different direction than her sister.

I especially loved the extreme plot twist, probably even more extreme than the one that you will find in Why We Broke Up. Or maybe I just fall for literary tricks to easily? Rowell definitely steered me in one direction; I kept disapprovingly shaking my head at Cath’s choices until finally I started to nod, and the fog started to clear.

This book took on a voice in my head that created a much easier read; it allowed a smoother flow, or it may just be that I’m merely getting back into the groove of reading books again.

The inside cover describes it as a coming of age novel, a label that I commonly use for my favorite book, A Tree Grows in Brooklyn. I might agree, but it’s certainly different, because it’s more focused on one time period, with fewer characters. The nuances that I find and the relevance that Cath holds to my own persona, combined with the contemporary plot, made this book a very enjoyable read.