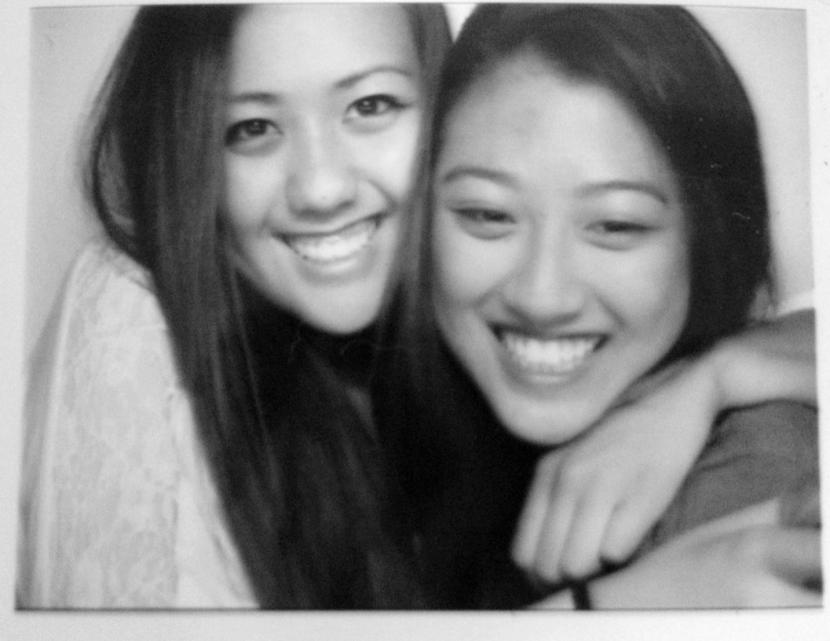 Left to right: Michelle, me

Have you ever just stopped and realized that if you hadn’t met a certain person, your life would be completely different?

When I think about it, my life would probably be pretty much the same. I’d still be 5’7″; I’d still have black hair and brown eyes (though at one point the tips of my hair would NOT be tinged with pink). So even though I’d look pretty much the same, I would be completely different on the inside.

When I had first met Michelle, I was not drawn to her. In fact, I didn’t even like her; I thought she was annoying. You see, I met her in the summer of 2011 at debate camp, where my first impression of everyone I met turned out to be wrong, and where I learned to get to know people before I decided to judge them.

So when Michelle and I became friends, I was a little surprised by the personality behind her stereotypical Asian girl cover. Then, I was taken back by how much we had in common. Finally, I was very grateful and happy I had decided to befriend her.

Because today, almost 2 years after that awkward incident, Michelle turns 17.

I’m sure that over the course of two years, both of us have changed so much in each other’s eyes. We’re older, wiser, and more mature than we’ve ever been, but each time I talk to her I feel like I’m just getting to know her again, because the conversation is never dragging. When you find someone that you can tell anything to, without fear of judgment or ridicule, you’ll take every opportunity to do so.

Michelle is for one, a bombshell (beautiful on the outside). Her hair turns brown for no reason, and it’s thick and fun to braid. Her eyes are light brown, especially pretty in the sunlight.

Inside though, hides a warm, idiosyncratic individual. I cannot express my gratitude for the multiple instances where I’ve broken down and panicked about something totally irrational, where Michelle has told it to me plain and simple that I’ve overreacting, but in a way that implies that she still cares. Because what a slap to the face it feels like, when someone says, “Get over it.” Like, ouch.

One of the most beloved aspects of our friendships is the way she says “no judgment” or “I’ll support you no matter what.” Somehow, we’ve managed to find an even balance between supporting one’s actions and speaking when you think the other is making a mistake. It’s in the way that I have yet to get insulted by anything that she says.

How did we manage to stay friends despite such a geographical divide? We live 1,000 miles from each other and I’ve known her for 11 weeks now. But you know what they say about the important people in your life? The special ones aren’t the ones who have been there the longest, but the ones who came and stayed in your life. Despite the odds, despite the geographic differences and our hectic lives that oftentimes don’t concern each other, WE’VE MANAGED TO BRIDGE THE GAP.

See, because you don’t just meet someone like Michelle and NOT keep in touch with her. We listen to each others problems without judgment (it’s called the no-judging zone) and with advice and consolation. Michelle also has an impressive taste in music that’s made its impression on me. She’s also wonderfully talented, especially at piano (play that Carly Rae Jepsen). Her sarcasm level is through the roof, but that’s okay, because she balances out my utter lack and misunderstanding of sarcasm.

She’s also one of the very few people that I know that are younger than me, so yay! I’m her elder.

In the words of Michelle: “hbd ilysm”

For anyone who knows Michelle, make sure to wish her a happy birthday. :)

For anyone who doesn’t, find the time to appreciate one of your best friends.