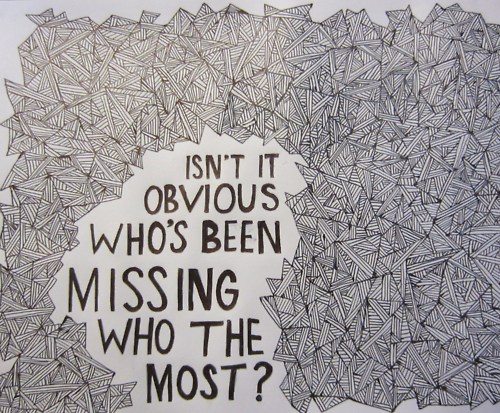 This is one of those relationships where I don’t think anything went wrong. We used to be the best of friends because of our similar backgrounds and traits.

I think I was the one who changed.

Look at you now! You are so beautiful and basically a better version of yourself than back when we were friends. I hope for my sanity’s sake that this isn’t because we stopped being friends.

I became more radical, and I branched off. Our interests didn’t align; I wanted to be inside on my computer, and you wanted to be outside in running gear.

You’re still a wonderful person. Today, I admire you from afar. We make great acquaintances, as our small talk is like awards show banter.

I ain’t even mad that we’re no longer best friends. You and I are one of the few relationships I’ve had that’s been relatively free of any tension, leaving me with nothing but happy memories. So thank you; I want nothing but the best for you in the future.

Lots of people thought you were a bad influence, but looking back, I see none of it. I just remember our time together as being, simply put, very fun.

You are one of the most pleasant friends I’ve ever had, and I was really sad when we started drifting apart.

I always refer to our breakup as a sort of cultural complication, which makes me mad. I can’t believe I let that kind of issue get in the way of you and I!

Towards the end, I awkwardly tried to force our relationship back together. Your response felt like you patting my hand gently and whispering: it’s over, honey.

These days, the few interactions we have in and out of class remind me of how great our friendship was. You and I have changed drastically, but our mutual sense of humor is still there.

In a sense, you were my eye-opener and remembering our time together brings nothing but a smile to my face.

Our friendship was super nuanced and complicated, but looking back and noting the way we hung out and obsessed over fads and trends, it’s also the epitome of a private-school friendship.

It always felt, to me, like one of those one-way-street friendships, but it took me a lot longer than it should have to realize. We’ve always had our ups and downs, but ever since we stopped being friends, my life became a little less climactic.

You and I used to sit and talk to each other about random things all the time, for hours on end, but I always thought that you talked about yourself too much. My tendency is to let that slide though, since I’m more naturally a listener than a forward-speaker, which is what made our friendship so sustainable.

In the end though, I was surprised that I wasn’t the one to cut myself off. It was you; you did it in a way so dramatic that it shook me up for months. It was like a sudden flood of emotions that you’d been holding back for months, unleashed in a little under an hour.

The conflict started over something very trivial, but grew to encompass every facet of our relationship, and I suppose somewhere in the midst of all of the chaos I realized that we weren’t going to work out.

These days, it’s still a bad bit awkward. We’ve both clearly moved on, and you turned into a complete stranger. I can only imagine what you think of me now.

You and I became friends over lunch; that’s all I’ll say.

I was very intimidated to be your friend at first; I thought you were way out of my league. If we’re being honest, I tried my very best to impress you.

But after a while, I found out that you and I had so much in common. Our friendship flourished with ease.

While we were best friends, life was laid-back and chill and I thought I had found an actual best friend for life (or is that just an urban myth?) So when we started drifting apart, I was very confused and unsure of what to do.

Looking back, I think it was me, and my excuses to not hang out, and the way I let myself get sucked into my extracurriculars that made you decide that I wasn’t worth trying to be a friend to anymore. It was me, wasn’t it? I started icing you out, being the kind of person I always promised I’d never turn into.

I guess that’s a valid excuse then. Still, I miss you because I think we abandoned a ton of undiscovered gold when we mutually called it quits.

Nowadays, it’s hard to connect with you, but my recent self-confidence boost seems to have helped. Or maybe it’s just the senioritis that’s making us reach out to each other once more.

A mutual friend has always stood as the indirect messenger, relaying news like an insurance collector would between families. I have a vague idea about how life is treating you; you seem very happy these days and I’m glad, I’m really glad.

You and I split up for reasons completely outside of our control. We were literally separated. I moved away and started going to another school, and we barely saw each other.

Every time I see you, we update each other about what’s changed since our last encounter (always a lot) and compare heights (I’m taller now!).

I think our friendship’s been the longest of them all; I’m not sure I want to characterize its present state as terminated, but I can’t see it getting any better in the future when I move even farther away from here.

It’s at a standstill, that’s where it is. That being said, our physical separation has also revealed the massive disparities in our personalities, indicating an inability, an unwillingness to return to its former state of affairs. Our lives are simply going in two opposite directions.

I would even go so far as to characterize our friendship not as undramatic but more uneventful, simply because we see each other so infrequently.

Not much more to say here; let’s see where the rest of our lives lead us, shall we?

Our friendship was unsustainable from the start. It feels like we were forced to become friends, as if we had no excuse not to, because of our mutual friend groups and the absurd amount of activities that we had together.

These days, we are estranged, and my life is much less stressful without your judgmental glares and your breathing down my neck.

I’ve very few happy memories from our time together. You gave me awful self-confidence and made me hate myself, picking the scabs of all of my faults and shames.

I have lots I want to say to you, but why waste my energy? I’ve never managed to get over the defensive wall that you’ve built for everyone.

Our relationship shifted around a lot; right before the schism, all that was left of my feelings for you was pity. When you were unreceiving of anything optimistic I had to offer, I decided that you are too toxic to associate with. So really, good riddance.

Our friendship was a one-way street, though it felt more to me like a conveyor belt from me to you, as I continually loaded homework help and the like on there.

But it’s all water under the bridge, I guess. We’ve both matured to a certain extent, enough that I’m confident in our abilities to be civil around each other.

The infinite tangles left un-addressed don’t bother me much these days; once I graduate, you’ll be out of my life for good, if I’m lucky.

No but really, I freaking LOVE this song.