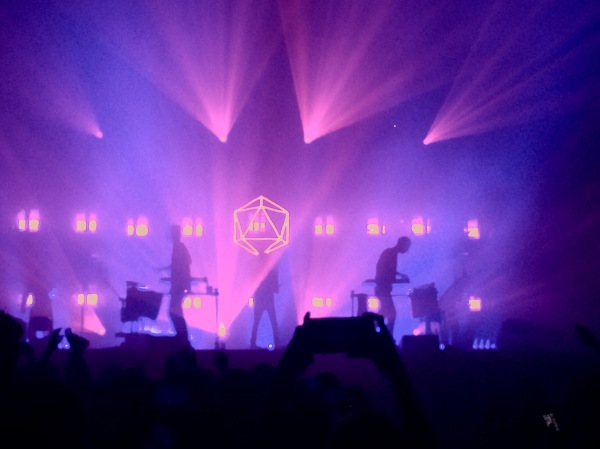 A mediocre picture I took at the ODESZA concert

Do you really want to know what I think of sophomore year so far?

The quarter was only 10 weeks long, but somehow (?), for 4 of those 10 weekends, I was at a live music performance. It started with Mad Decent Block Party back in September, then it was Freaky Deaky Halloween, then it was Lido (with openers Cofresi and Louis the Child), and finally, this past weekend, I saw ODESZA with Jai Wolf.

Fall 2015 consisted of a lot of dancing, sweating and overall, just not giving a shit what other people thought of me.

But you know what?

Preparing for an event is nearly as fun as attending the event itself. The week before, I try to encourage myself to listen to as much work from whoever the upcoming act(s) is, just to get psyched for it. I also try to read about the artist’s history and familiarize myself with the discography. I listen to old, popular songs but also search for new, hidden jewels.

And even when the event is over…wow, that afterglow. There’s a certain awe associated with seeing people perform live, how they make magic in real time, how they hype up a crowd, and how they get you loving the rhythm of life.

It’s amazing. You re-live the concert over and over again for days or even weeks. You find new favorites that you weren’t able to really appreciate before.

My Jewish history class really surprised me. I thought it was just going to be another distribution (“distro”) class, a requirement for the curriculum that I’d approach with the same let’s-get-it-over-with attitude that I normally have, but I actually found the lectures extremely engaging and interesting.

I thought that since I’m not Jewish and am not easily intrigued by history, I wouldn’t enjoy it much. However, the few times that I HAVE really loved my history classes (ahem, Mr. Monahan’s class in 12th grade), it’s been because the teacher was a particularly great storyteller.

Well, in the case of Yohanan Petrovsky, it’s less of a children’s tale prose and more of a critical rhythm that he follows when talking about early modern Jewish history. He tells jokes to perk up the class, tries to learn the names of the students, and speaks in a style that convinces me that he has all of the world’s knowledge under that yamaka. His grey-haired wisdom reminds me of that of my 10th grade English teacher, Mr. Finsthwait.

Yohanan is extremely cultured, I’ve learned, from all sorts of interesting life experiences acquired from travelling around Europe, captured in photographs of mosques, castles and synagogues that he puts in his Powerpoint lectures. He keeps the class engaged and rapt, even though we don’t always do our reading.

Moreover, he constantly urges us to be skeptical about historical documents and to analyze them from a more historically accurate perspective. Even if I forget all of the substance that he taught us in class, I feel that he’s relayed skills to me that will be useful for the rest of my life.

My journalism class is simply unprecedented. I’ve never taken a class where we meet once a week for 5 hours on a Wednesday morning (but wait for it) in downtown Chicago to report for an assignment.

Our instructor, Noah Isackson, talks to us as if we were all new colleagues at work. He’s not just sitting on the sidelines. He’s out there, coaching us. He finds us opportunities to sit in on court cases, go to new parks and spontaneously interview people, attend a press conference to watch the pros, and tour one of the nicest and most interesting new hotels in Chicago.

These opportunities are incomparable to anything else I ever got out of college. To explore the city and learn in the field has taught me so much more than a textbook and a classroom ever could.

I’m surrounded by a bunch of adventurous journalism students. We bond over long CTA rides. Specifically, the PEQUOD SQUAD has been going on food adventures after class since day 1. We’ve hit up a pierogi shop, a food truck park, a Vietnamese restaurant and more. I love the kids I’ve befriended, and am so glad that I took this class.

One thing that I’ve realized this year is that music plays an integral role in my life. If I’m awake, I’d rather listen to music than talk to people. I live for the consistent thuds of bass and the crooning of Sufjan Stevens. I want to listen to something that I know and can predict, something that I turn into a small tradition that I uphold for a while and then shed, for more scarce use.

I got a bike this year, and wow, biking with headphones probably isn’t the smartest move, but when you’re gliding along the lakefill in the fall, past those transitioning trees with the sunshine sparkling on the water, wow, it hooks me. It mesmerizes me.