PEACE IS THE MISSION

September was an up and down month.

By that, I mean lots of changes took place, and not all of them were positive. September was moving into a new apartment, roaming around campus during Welcome Week, and starting classes after a long summer. Adjusting to a new environment always adds a little bit of stress to your life, and not living around your family is a sudden change that makes you blink in surprise like, wait what?

Still, I have lots of favorites that I want to share with you all.

Back in July, I threw down at Atlanta’s Mad Decent Block Party. I was thoroughly impressed by the live performances of Keys N’ Krates and Yellow Claw.

I was already obsessed with “Dum Dee Dum” by Keys N’ Krates, but Jr. Flo’s turntabling skills were honestly astounding. Yellow Claw’s attitude and approach to live performances really just gets a crowd hyped, and ever since then, I’ve been consistently jamming to their music.

September’s Block Party in Chicago introduced me to the amazing music of Grandtheft and Party Favor. Party Favor’s “Bap U” is a classic, but have you heard Grandtheft’s remixes of “Tuna Melt”, “Mobbin”, “Give Me More”, and “Keep It 100”?

In addition to Mad Decent inspired tunes, I’ve also been loving the Soundcloud account birocratic this month. Shout out to Kenton, who showed them to me! Favorite songs include: hurry! garoto, let linger, and this one:

I love ZHU, and I also saw AlunaGeorge live last year when they came to Northwestern, so I was all for this song. The best part is easily 2:55. Enjoy!

I also loveeeee Troyboi, so when I saw that he collaborated with Diplo, I was instantly hooked!

Finally, I have to mention that I’ve been continuously falling in love with Major Lazer (especially their newest album) every time I’ve listened to them these past few months. I love their music style and everything that they stand for, including their new animated series, which I’ll talk about later in this post.

Earlier this month, Eileen and I headed to downtown Chicago to have the nation’s best burger, at Au Cheval. Hopefully, I’ll have a review up on Cat the Critic soon, but as a little teaser, the burger was stacked with thick strips of maple bacon and homemade dijonaise, and topped with an egg cooked however you’d like. We ordered it with fries and garlic aioli. 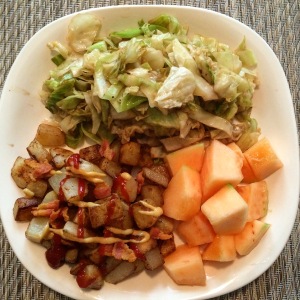 Yeah, so as a college sophomore, I’m living in my own apartment and making my own meals in my very own kitchen.

It’s been liberating and a learning experience, to say the least. I get to eat whatever I want, but I have to eat whatever I buy. I made the mistake of buying three huge sweet potatoes, which isn’t a big deal until you realize that no one is eating them except you. So you spend a week and a half getting creative with sweet potatoes, but still kind of resent them with your last bite.

I’ve invited friends over to cook and eat with me, and we feel like twenty-somethings dancing around in the kitchen and sitting at the dining table. Lots of recipes were born, coming soon on Cat the Critic.

Shoutout to my boy Maddy for showing me one of the funniest shows of all time, Rick and Morty. It’s an Adult Swim show about a family consisting of a passive aggressive father, a valley-girl teenage daughter, a headstrong mother, and the two main characters, a pubescent adolescent son, and a consistently drunk, genius scientist grandfather. The grandfather, Rick, and the grandson, Morty, go on crazy adventures in every episode where they sometimes travel to different universes and dimensions, or Rick brings something crazy to the household which almost always ends up throwing the world into chaos.

You’d have to watch it to understand why I love it so much, but it’s not one of those shows with a heavy plot that you need to “catch up on”. Rather, it’s a way to kick back and unwind at the end of the day, and just let yourself laugh at something dumb.

My homie David showed me the show Major Lazer, inspired and partly produced by the artist Major Lazer. These ten-minute episodes are all about a future Jamaica, where the kids are hardcore about partying and smoking weed. Major Lazer is a bad-ass unconventional hero who comes to the consistent aid of a resident named Penny. He defeats funky villains like Dr. Nerd, who steals all of the world’s bass drops.

Like Rick and Morty, you just have to ~wAtCh~ it to understand why I love it.

Lisette‘s the best; she encouraged me to sign up for a library card at our local public library, which was a pleasant switch from our school’s library. This place has more fiction novels to read for fun, which is the main reason I read in the first place. It also has fewer college students making a racket, and instead hosts a bunch of interesting Evanston locals.

I haven’t always had a positive relationships with libraries, but I’m really feeling something with the Evanston Public Library.

The first book I checked out was The Help. It’s a story about Jackson, Mississippi in the middle of the twentieth century. Blacks were mostly working as house helpers, or “the help”. They faced a lot of discrimination and were commonly mistreated, but the interesting and relatable element of the story was actually rooted in the power of journalism. A journalist just didn’t want to keep accepting the injustice that she saw everyday, so she did something to challenge it. It’s a great story that’s told from multiple perspectives, both white and black.

I’m excited to get back into the reading craze. I really missed it.