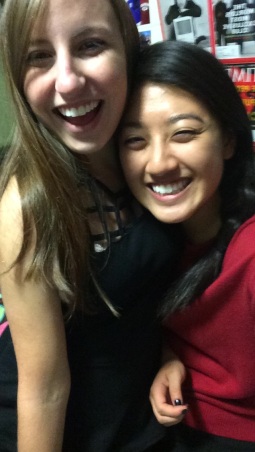 Ask me how Lisette and I met, and I might shoot off some story about a conversation we had at an Atlanta meet-up, or a week or so into the first week of school when she sat down at a table where I was sitting, alone.

But if you ask Lisette, she will tell you that at a mutual friend’s (S/O Mili!) graduation party, she saw me from afar, having heard about me since we were both going to the same school.

However, we just missed each other, because I was leaving just as she was arriving, and apparently I came off as too unapproachable, so we didn’t actually meet that day.

The Lisette that I know now is so much different from the individual I met 2 months or so ago.

She likes to try new things, take lots of pictures, and listen to rap music that’s got her feelin’ some type of way.

We tend to be very protective of each other.

We like to make breakfast plans, even though they manage to fall through half of the time. During conversations she has a tendency to look up and get a bit cross-eyed.

We use secret code words and code names straight out of elementary school. We both think horses are overrated.

Baseline – I’ve never had a friend like her. And by this I mean, the conversations we have, our general interaction, and (especially) the activities that we do together, whether it be going out on a Saturday night or staying in (on a Saturday night) because sometimes, dance parties in our dorm rooms is all that we need.