To put it simply, Bryant is my oldest friend. We’ve known each other since the beginning of time, way before pre-school began. During the rough elementary years, we didn’t attend school together, but I think I saw you here and there at tennis practices and remembered the fun times we’d had as toddlers, toddling around Disneyland and North Carolina and whatnot.

Then we started middle school together, but were we really friends? Junior high consisted of boys being boys and girls being girls and so, we were more acquaintances for those three years or so.

High school is where we started spending much more time together. You will find a trend in most of my interpersonal relationships, that debate has helped me bond and make friends with most of the people I know and love today. If you’re a debater, I hope you’re reading this and nodding your head in agreement.

In the debate community, there’s a trend of creating nicknames for debaters based on the first letter of their first name and then adding their last name on. Ours sound so alike…Bwang and Czhang 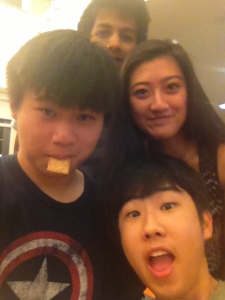 In sophomore year, we were paired as partners for a brief period of time, and that partnership was full of nothing but deceit and denial. We had unrealistic expectations of winning that were not at all backed up by our work standards…every loss was a case of stress and hardship.

Early in that partnership, I remember sitting at Chick-fil-a with you and talking about winning the big national tournament and agreeing on that mutual goal, as if stating it would make it happen, as if no one else wanted it like we did.

After that partnership fizzled out, we sort of spat hateful fire at each other for a few months, but whenever I think back to it these days, I can only chuckle.

Bwang, you sort of blossomed into a goofy character, making inhuman noises and scaring off many people in the process. Debaters thought you were hilarious for that exact reason and so you are some sort of jocular celebrity. Lots of kids tell me I shouldn’t laugh at your jokes, but I just can’t help it. You crack me up.

In junior year, we went to prom together and the way in which you popped the question was slightly elaborate but slightly more humble and humorous.

Our senior year, we were set as permanent partners and my, how the two of us had changed. Both more mature, knowledgeable, and a bit more determined. But as your streak on your comedic comet started to  fizzle, I saw major changes in your character over the course of this year. You discovered the sobering view of reality, realized the fleeting nature of high school, and started to anticipate the future.

And then you took my best friend Eileen to prom. Haha, sweet.

Bryant, I have known you since before I was a toddler, and my, how we’ve both evolved over these 18 (happy birthday!) years or so; I cannot believe we’re both going to college in the same state. There’s no doubt that you and I will remain friends.